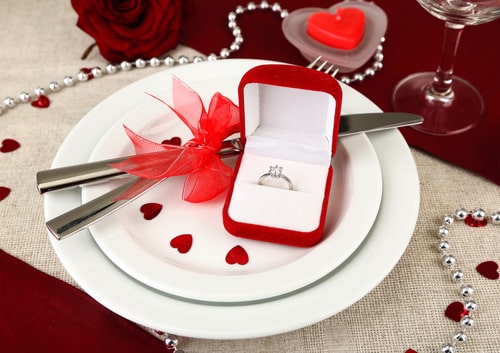 We’ve just past Valentine’s day and we’d like to share some of the best stories that we heard this year about couples who decided to tie the knot on Valentine’s Day.

Goodson123 on Reddit went with a traditional approach. He took his bride to be on a surprise trip to the Greek island of Santorini. He freely admits that she thought they were just popping out for dinner near the airport and that he had to smuggle her passport out in secret for the surprise.

They shared a villa and a beautiful sea view. He popped the question after they visited Delphi together. He says the Oracle must have meant them to be together.

The Paper Hearts That Did The Trick

Vividaether’s boyfriend was unemployed and broke on Valentine’s Day but that didn’t stop him from winning her heart. She says that he stayed at home and made her 100 paper hearts, by hand, and on the back of each he wrote a different reason that he loved her. On the 100th, he asked her to marry him. How could she resist?

This one’s a new one on me and I have to be honest, this will either work really well or come across as a touch creepy – so think twice before you emulate what MrWhisper did for his girl.

He went to her college and had her roommates let him into her room while she was at school for the day. He then decorated the room with flowers, hearts, etc. and gave her jewellery. Then he got down on one knee over dinner.  She loved it and said “yes”.

He Wrote Her A Novel

Rosiewin decided his girlfriend’s passion for romance novels could be made even stronger by writing up their own romance. So, he penned a 150-page (short) novel for her telling the story form his own perspective. It started at dating and ended with a marriage proposal. Of course, in real life that was just the beginning of a life time together. This is brilliant, but a lot of work went into it.

The Man Of Her Childhood Dreams

This “deleted” Redditor says that he wanted to make his girl’s dreams come true. When he met her, she would always talk about how the restaurants of her childhood were bland and that she’d wished the Rainforest Café would have existed then.

So, he took her to the Rainforest Café. They wore safari hats, he gave her a stuffed elephant shrew (her favourite animal) and then he proposed. There is a happily ever after at the end of this dream. I think this is the best of them all, it’s a proposal which really taps into the emotions and love for a significant other.

Of course, all these dashing gentlemen needed one more thing – an engagement ring. Call me about your engagement ring and I can give you some tips on how to make your proposal just right when the moment comes. Then you’ll have the perfect ring and the perfect proposal.