A Brief History Of Engagement Traditions 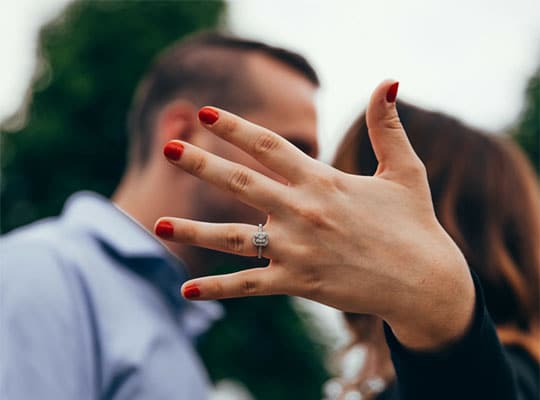 Are you thinking about getting engaged? All you need to do is find the perfect person to be with, buy an engagement ring and then ask them to marry you. And if you do, you’ll be joining in one of the richest and greatest traditions in the history of mankind.

Engagement Was Born In Judaism, Probably

When I say that engagement has been around a long time, I really mean a long time. The earliest records of an engagement are in the Jewish tradition.

Back then, there was no courtship or direct proposal from one lover to another, an engagement was more like an arrangement between families. The groom’s parents and bride’s parents would meet and discuss the way that things  would work and any transition of property to help the couple out and then a formal contract would be agreed on.

Once that contract was made, it was a grave insult to back out of it. So, it was paramount that the couple be thrown together as fast as possible, so even before the wedding an engaged couple would live as man and wife.

In a peculiar moment, if the marriage didn’t take place because of an action of the would-be bride, she would still have to go through a divorce before she could be engaged again!

The Romans Changed Things Up

The Romans took the Jewish approach to engagement and they changed it up. They required that an engagement was arranged in a public place with witnesses and the first rings were exchanged. They were made of iron not gold, though.

The engagement ring was worn on the left hand and placed on the third finger to connect it to the heart.

The Middle Ages Moved Things On A Little

The church got in on the act during the middle ages. If you wanted to get engaged, you had to get the priest’s permission and you had to sign a contract in the church to register your intentions.

There Was Also An Engagement Ceremony

Nowadays we have an engagement party but there was more of a formal approach to engagement for a long time.

The couple’s mothers were required to hold a formal meeting and agree on the date of the wedding. Over time, this became something of a ceremony in its own right and it was where the terms of the wedding ceremony were often agreed.

The husband’s job was limited to sending some flowers on the day of the engagement, not just to his would-be bride but also to his mother-in-law-to-be too. He was also required to provide the engagement ring to seal the proposal on the engagement day.

No Need To Stand On Ceremony Today

Today, you can become engaged any way that you want to. Choose a ring, or better yet, have one made to represent the unique love you have for each other (and I can help with that – call me when you’re ready) and then make your own tradition.