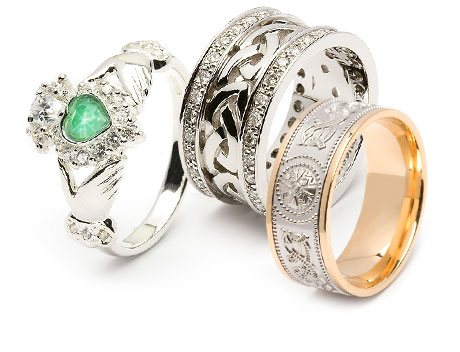 It’s all too easy to chase fashion but sometimes it’s better to remember that you want a wedding ring to last for a lifetime and not to the end of the latest trend. That means you might want to consider going with something timeless and classic when you’re choosing your wedding ring.

But what are the classics and what makes them awesome? I think that you can draw ideas from the all-time greats and then make them your own. And no, you don’t need to spend quite this much money on a ring, you can get timeless appeal without being as rich as Bill Gates.

Valued at nearly $1.6 million in today’s money, this awesome piece is set in yellow gold with a 2.88 carat diamond and a 2.84 carat emerald as the centrepieces. The additional diamonds are cue in a marquise style.

You’d expect a future president to hand out a ring that really rocked a girl’s hand and JFK did just that. A long romance turned into a wedding ring that’s still talked about today. When a man loves a woman, it has to show in the ring. JFK knocked it out of the park.

If you marry royalty, then you expect that a king’s ransom will be paid for the ring. Back in 1955, Grace Kelly’s ring would not have been cheap. Today, the 10.47 carat emerald cut diamond mounted in platinum with diamond baguette flanks is estimated to be worth nearly $5 million!

Prince Rainier was no fool though. He didn’t propose with this ring. He bought a cheaper ring for a test run while he popped the question. After she had said “yes,” he and Grace worked together to design a bespoke ring that outdid all the other actress’s rings of the time. She agreed never to take it off and thus, the ring has a starring role in High Society.

It’s fair to say that Philip is not the star of the show when it comes to the British Royal family, but he did his bride proud when it came to a romantic ring. In 1946 he asked the designer Philip Antrobus to design a platinum and diamond engagement ring. It has a 3-carat diamond set in an eight claw coronet setting and believe it or not, the ring is only estimated to be worth $150,000 today.

Philip was clearly a frugal man compared to our other two husbands, but he got his money’s worth, the ring is a classic design of good taste and modesty (for a member of royalty).

What do these rings all have in common? They were bespoke. They were designed for the ladies who would wear them, and they are amazing for it. Don’t worry, you won’t need to spend that much on a bespoke ring, but you can do your partner equally proud. Call me and find out how today.