Four Steps To The Perfect Ring – Your Birthstones, Your Story

Soonah is a Mum – a busy mum that doesn’t spend very much time shopping or very much money on herself.

When she lost her mother at a young age she wished she had a piece that she could have held on to. As her 10th wedding anniversary approached she wanted to celebrate her and her husband’s three greatest achievements – their children.

Soonah decided she wanted a perfect ring. One that meant a lot to her and told her story. She wanted a special, bespoke piece of jewellery that she could pass down through the family.

One piece of jewellery that means more than anything.

The flat band design is a rub set with three stones and platinum around the band encasing her three childrens’ birthstones. 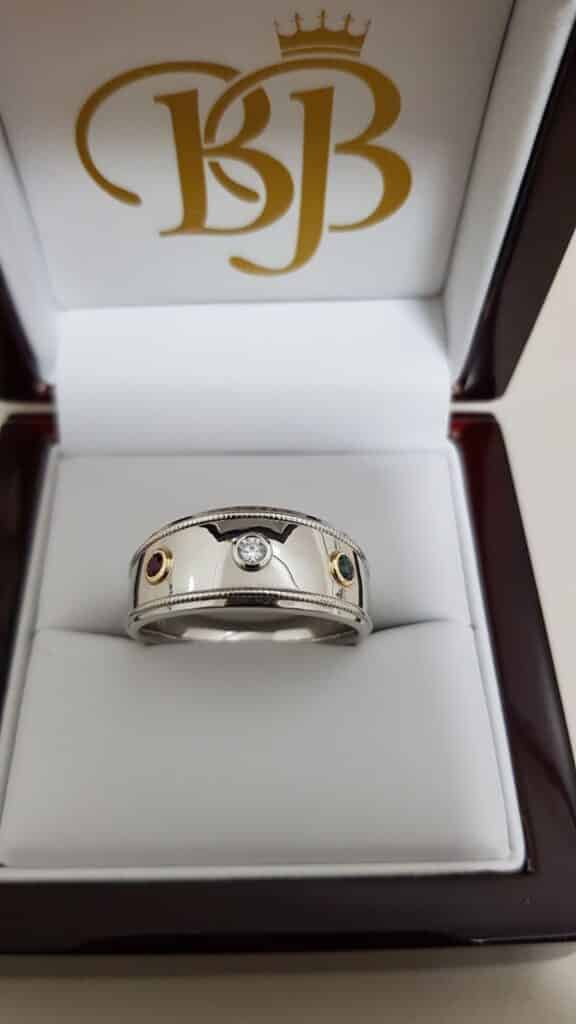 I knew instantly that he was the man to make my dream ring come to life.

With Michael, she could design a ring with a birthstone for each of the special little humans in her life.
It wasn’t a piece of jewellery but a piece of her family’s story and a future family heirloom.

It only took two consultations to get a design even better than she had imagined.
He understood the story she wanted the piece to tell – her family’s.

When she went to Michael looking for clarity, he gave her a clear outline – not just for the design, also the budget.

Four Steps To the Perfect Ring.

Soonah had a rough idea of what she’d like: a flat band design with her children’s birthstones. She didn’t know exactly how much she wanted to spend or even what to expect to spend. What she did know is that she wanted it to be perfect.

Step 2. The Drawing Board

When Michael draws Soonah’s idea in a 3D image – she sees an idea take shape. Imagine if you looked at your future piece of jewellery and the chance to enhance the stone and the setting. Or perhaps you don’t like it that way? That’s okay – you change that, too. In 3D it’s easy for Soonah to see if she wants to say yes or no.

Between steps 2 and 3, Soonah takes a moment to think about what’s ahead. At this point Michael gives her the chance to change her mind, walk away, whatever she likes, there’s no obligation. Soonah decides she wants to go ahead and this consultation is simply about finalising the design, making some final tweaks and basically just getting excited.

Step 4. The Unbox – Seeing The Ring for the First Time.

Soonah now has a beautiful piece of her story that she wears everywhere.
If you would like to see the moment Soonah sees Michael’s Bespoke creation, you can find it here.

It’s a funny story, I ordered this to coincide with my 10th wedding anniversary last year, which is actually 10 years this year! Looks like earrings are on order for the proper 10th! My kids love it and often rub it and point to the stone that is “theirs”.

When Soonah approached Michael, she knew she wasn’t going to find an off the shelf piece that told her story. As it turns out, Michael created a piece of jewellery even better than she could imagine.

If you would like to find out about adding your birthstones to your next Bespoke piece, submit your ideas in an enquiry today.