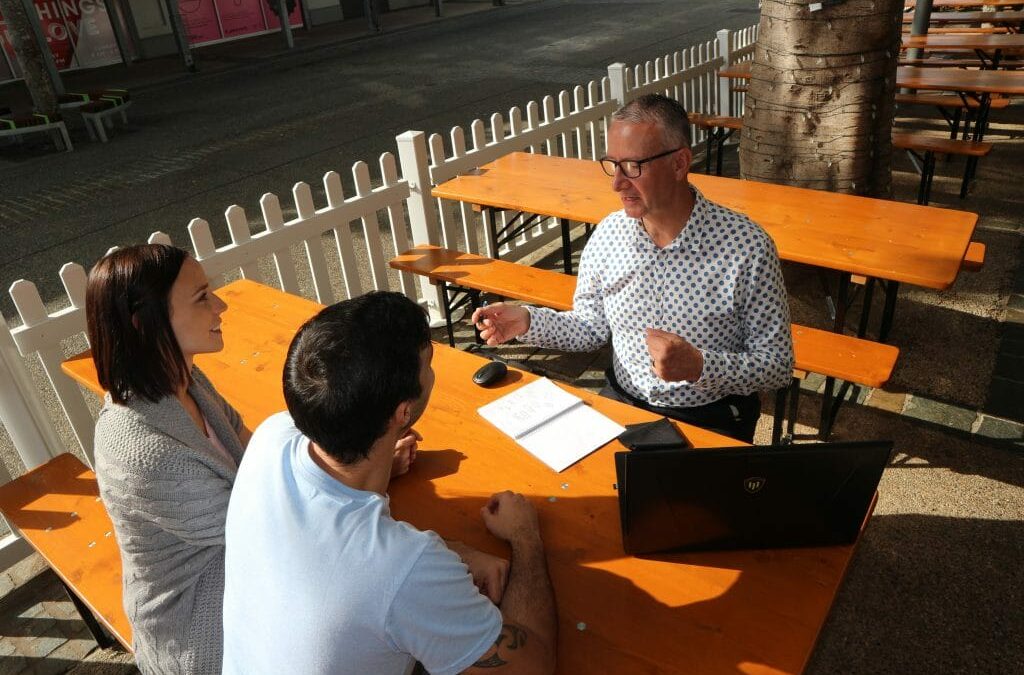 When it comes time to pop the question, knowing what engagement ring to buy is a battlefield, so any solid advice you can get from someone is gladly appreciated.

Now, there’s a good chance you’ve heard of Hitch, the character portrayed by Will Smith to help hopeless men woo the women of their dreams. There’s another good chance you’ll recall Trent (Vince Vaughn) in the movie Swingers. He plays wingman to Mike (Jon Favreau) and ensures he never goes home alone.

Then there’s possibly the greatest wingman of all time in Nick ‘Goose’ Bradshaw from Top Gun. The high flying partner to Tom Cruise, Goose goes above and beyond to make sure Cruise gets the girl by singing backup on “You’ve Lost That Lovin’ Feeling”. Seriously, what a lad!

But fellers, it’s time to move over, because there’s a new wingman in town. And he’s working with a girl’s best friend – diamonds.

Michael Dransfield has been helping blokes propose for more than four decades. And he isn’t simply trying to sell you a ring sitting in a cabinet. No, he’s only interested in creating unique rings for unique experiences. After all, no two people are exactly the same. So why should engagement rings be?

“I’m not like a traditional retailer who carries stock in a shop. I make and design jewellery for people on an individual basis,” Michael says.

“If blokes are totally unsure of what style to buy, I recommend making a silver and cubic zirconia replica of a ring they think their partner might like.

“It takes the pressure of his shoulders, he has a ring to propose with, and he hasn’t outlaid a lot of money on something he or she might not like. He can then make an appointment with me and we can start to work on the ring he or she really wants.

“I’ve done this quite a few times and I think it’s a great idea because the stats suggest 30% of women who receive an engagement ring don’t actually like it. They accept it of course because of the good intentions, but it wouldn’t have been the one they chose.”

Michael recommends an initial consultation over a cup of coffee or even during a lunch break, so as to avoid having to conduct an undercover mission on the weekend.

“The average age people get engaged in this country is 28-32. At that age a lot of couples live together. If the guy says he’s going shopping on a Saturday, his partner is definitely going to ask him what for, and there’s a good chance they’ll want to tag along… then what?

“By being flexible and personalised, I can meet clients at a time that suits them, in a place that’s convenient,” Michael says.

And when it comes to such a big investment it’s only natural for blokes to ask how much it will cost or what they should spend. Michael has a simple answer: as much as you can afford.

“It’s no good if your partner has expectations of a 20k ring, and you can’t afford it, to then go beyond your means to buy it. That kind of situation only causes unnecessary stress and strain on the relationship.

“At the end of the day spend what you can afford and buy something your partner will like within that price range. It’s my job to maximise the budget and create something truly bespoke with it.

Further to the ring itself, Michael is more than happy to give advice on the proposal itself.

“Blokes often ask me how, when and where they should propose.

“I think you have to keep it within the realms of what you’re comfortable doing. Whether it’s where you had your first date, on holiday, at home… wherever.  I’ve done it myself and even though you’ve known somebody for years, it can be really nerve-racking. I found asking my father-in-law quite daunting as well.

“At the end of the day it comes down to you and listening to your gut feeling.”

With a passion for things made locally by local jewelers, Michael recommends you resist the temptation to buy cheap jewellery from overseas when it comes to something as significant as an engagement ring.

“I’m not saying it’s wrong to buy jewellery made in the likes of the Far East. I think it serves a purpose; however, you get what you pay for. With something like an engagement ring, it should last a lifetime and some of the pieces I’ve seen produced there wouldn’t even last a year.

“People get caught up in the cheap prices, but you get what you pay for. And most of the time people are still paying a lot more than they should on these pieces.”

Michael recommends people go to an independent jeweller where they should ask plenty of questions.

“Sit down and talk to them. Get the 4 C’s explained to you. As an example, the most important thing when it comes to a diamond is the cut because that’s what reflects the light and gives it the scintillation. It’s about looking and understanding. Then you have to consider the colour, clarity and carat.

“I’d rather talk and educate someone, and not sell them something, but feel good knowing they can go away and make an informed decision,” Michael says.

After spending so many years making jewellery at a bench in the UK, Michael reckons the best part of his job is seeing the delight in people’s faces once they’ve got that ring on their finger.

“When someone opens that box and sees the ring, it’s a truly satisfying experience. I love receiving cards and testimonials from happy clients. Seeing photos and comments on social media is another big driver for doing what I do. I love making people happy.”

Michael’s business, Burgundy Bespoke Jewellers is based in Queensland; however, he welcomes enquiries and opportunities to create the perfect ring from anywhere around the country.

So ask yourself, “Is it time you put a ring on it?”